In a previous post we covered studies that show using HRV to be significantly better than a standard training program in improving the performance of club and recreational runners.

Now, a new study by researchers from the Universities of Alicante in Spain and Stellenbosch in South Africa shows very promising results in well trained (but not elite) road cyclists.

All participants performed three sets of performance tests, which consisted of a graded ramp test using their own bikes on a Wahoo Kickr trainer, followed by a 40 min all out time trial effort.

HRV was measured by the participants at home every morning with a Polar chest strap, and the last 60s worth of heart beat data were analysed using Kubios HRV lab software, which has sophisticated analysis and artefact correction capabilities. From this, a 7 day moving average of the log of the RMSSD was calculated (this is exactly the same calculation as the ithlete thick blue HRV line). During the four Baseline weeks, participants performed ~8hrs per week training, during which the mean and standard deviation of the HRV measures were calculated for each participant, to allow thresholds to be created for the HRV guided Training weeks that followed.

During the actual 8 week Training phase, an algorithm based on the earlier HRV guided study with runners was used (shown below). The original daily guide was modified with tweaks to include HIIT and threshold days, as well as low intensity training, and with rotations to avoid monotony. The practical outcome of this was a distribution of 66/24/10 % in each of the three low/moderate/high intensity zones. 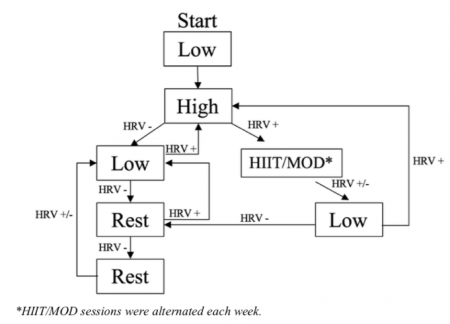 Time spent in each zone was very similar to the HRV guided group (64/27/9 %) but with a fixed rotation that did not depend on the cyclist’s HRV for that day.

Both groups spent an average of 9 hrs training each week during this phase.

The major finding of this new study was that HRV guided training led to substantially greater increases in Peak power (5%), power at VT2 (14%) and power over the 40 min time trial (7%) than by using traditional training, where the Peak and 40 min TT power hardly improved at all.

When looking at the ranked change in performance on the 40 min TT, it is clear that HRV guided training produced many of the best (4 of top 5), and avoided the worst (1 of bottom 3), results: 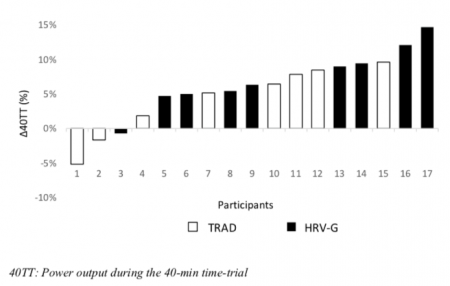 The variation in HRV during the Training phase was also much smaller in the HRV guided group.

These are clearly impressive results, especially since the cyclists were all experienced, and might be expected to have reached a plateau in their performance. An average improvement of 17W over a 40 min TT is not to be sniffed at for an experienced rider, likely representing an almost 1 mph increase in speed.

Although this is an encouraging sign of progress in HRV guided training, not everyone on the HRV program made larger improvements than everyone on the traditional program. The authors point out that there is likely room for further optimisation in the algorithm, also to cater for different levels of experience such as less well trained & elite athletes. Personally, I find the results encouraging enough that I will be trying this algorithm in my preparation for the forthcoming UCI world Gran Fondo championships in Italy this September.

We are looking forward to meeting the authors at the Science and Cycling conference at the start of the Tour de France this week to talk about the algorithm in more depth and will report back what we find.

If you want to try the method in the meantime, we suggest you use the ithlete Weekly Change colour to guide whether you perform HIIT / threshold (HRV High / green) or low intensity / rest (HRV low / Weekly Change orange or red). I will report back on my progress, please feel free to do the same in the comments below if you try it. Any feedback could be useful if refining the algorithm.