Why ithlete? The importance of paced breathing

There are many great reasons to choose ithlete, so many that we’ve written a blog series looking at why we do things the way we do. Follow the series to learn more about the type and length of measurement, how breathing influences your HRV and much more. 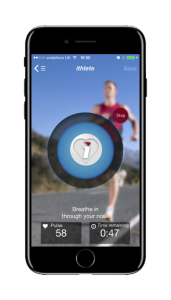 We chose a particular rate and pattern of breathing for ithlete because it had given good results in testing and was supported by research. We later found out that it coincided with the resting breathing pattern of a group of club runners, so this finding wasn’t by accident.

When we were first designing ithlete back in 2009, we set up several face to face and phone interviews with researchers who had been looking closely at HRV, as well as research cardiologists who had been using HRV in their clinical studies. One topic that consistently came up in the meetings was breathing: “The amount of HRV measured on a person depends on the depth and frequency of their breathing” I was told, and “the slower and deeper the person breathes, the greater their heart rate varies”. In fact, when you breathe in, your heart beats faster, and when you breathe out, it slows down again. So it makes sense that breathing in a consistent way will reduce unwanted variation and allow underlying stress levels to be more visible

In a recent interview, Dr Peter Backx, Senior Scientist at the Toronto General Hospital research institute gave a great explanation of why this is:

“Actually the variability comes primarily minute to minute, second to second from the interaction between your breathing and your heart’s activity. And the reason is because every time you inspire, you actually create a little bit of negative pressure in the chest which is where the heart is. You pull more blood towards the heart and then that result is that the heart has suddenly more blood at its back end and it will spontaneously therefore increase the amount of pumping that it actually does. So in response to your breathing, your blood pressure actually goes up and down and this vagus nerve is linked to your brain, and it’s controlled through a reflex called the baroreceptor reflex.

And that’s really what’s causing this heart rate variability and what we mean by that is that it’s a second to second change in the time between beats of the heart. So I think with that background, if you have a stronger vagus, the primary impact of this – I mean having an increased heart rate variability is now going to be inevitable because you have more vagal activity.”

Even back in 2009, this realisation of the importance of breathing had become very important, and all new HRV studies had to show how they had controlled for breathing as a variable before they could pass review for publication. I was pointed to a paper that made the case strongly and was convinced we needed to adopt paced breathing as part of the ithlete daily routine.

We chose the rate of 7.5 breaths per minute, because it maximised the aspect of HRV related to breathing, known formally as respiratory sinus arrhythmia or RSA for short. This is important because we want the parasympathetic or vagal HRV component to be the one we measure rather than the other, lower frequency HRV components (LF and VLF), so making it as large as possible makes sense. Having the parasympathetic nervous system stimulated in a consistent way using paced breathing is also one of the reasons we can get away with such a short, 1 minute measure.

Four years after we made this choice, a study by French scientists found that 7.5 breaths per minute was the naturally chosen breathing rate of a group of 10 club runners, so it looks like we made the right choice for our target audience of athletes!

It is perhaps not the best choice for more sedentary people, who tend to breathe at an average of 14 breaths per minute at rest, and who might find it too slow.

In summary then, we do recommend you follow the breathing pacer. Our current research shows you should pay particular attention to the inhalation phase to get the greatest consistency, inhaling from the belly through the nose, rather than the chest. For the exhalation phase, you can simply let go, and let your chest and diaphragm return to their fully relaxed state.