Previously, the research team of Andrew Flatt, Mike Esco and colleagues from the University of Alabama looked at heart rate variability (HRV) in Division 1 champion college football players during pre-season training. This study found a clear difference between positional groups in the ability to handle the spring camp high training loads. They concluded that 60s pre-training HRV readings are both practical and offer useful information to coaches of elite American Football players to help optimise training loads for players in different positions.

This second study followed and was designed to assess HRV changes during the early part of the competitive season to see whether the same effects on different positions occurred to the same extent.

In season training typically consists of 2+ hours of intensive running demands involving frequent body contact between players. Sessions are often held on consecutive days leading to the potential for recovery to be incomplete. Previous studies have used hormone and subjective markers to assess day to day recovery, but there remains a gap for cardiovascular recovery also to be measured. This is important because players achieve very high peak heart rates close to their maximums during positional drills. The cardiovascular system also plays a key role during recovery to re-establish homeostasis. In the previous pre-season study, they found that the recovery measured using HRV between sessions depended on the size and weight of the players with linemen taking the longest to recover. Linemen are a particular concern because of their combination of large size and high running demands makes them more vulnerable, especially if their aerobic fitness is not at a high level.

They measured both HRV and resting heart rate (RHR) using the ithlete finger sensor before Tuesday and Wednesday training sessions for the first three weeks of the competitive season. This was done at the training facility using a kiosk style measurement app running on an iPad that can automatically upload heart rate, HRV and subjective measures for an entire squad to the ithlete Team System running in the cloud.

Since Sunday and Monday are rest days, Tuesday was the best day to do the first of the two HRV measures during each week as the players should be at their most rested. Measures for each player were averaged for the 3 weeks to see the change from Tuesdays to Wednesdays following the most intensive training on the Tuesday each week. Training load was also captured using the Catapult GPS system fitted with accelerometers.

The chart below shows the change in HRV from Tuesdays (rested) to Wednesdays (following 1 days intensive training) for each player, grouped by position. Skill is comprised of backs and receivers, and Mid-Skill comprises running backs, line-backers and tight ends. 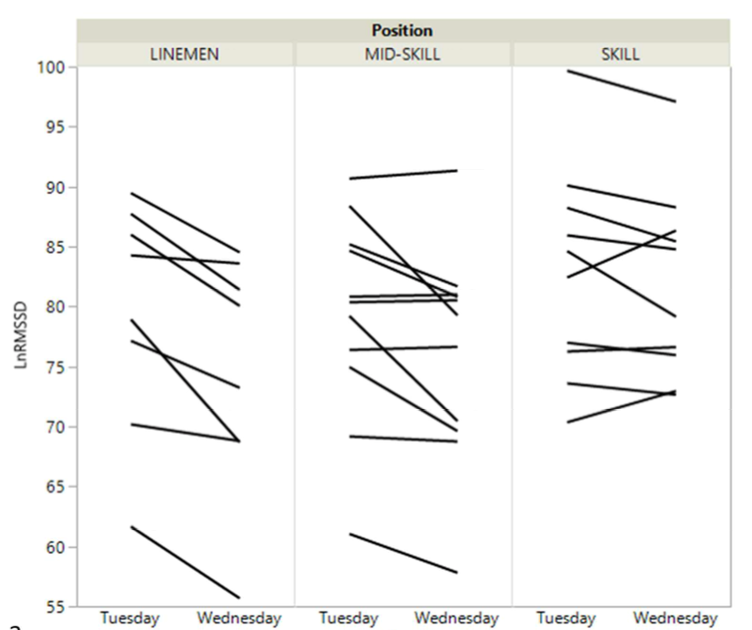 The main findings of this study largely backed up those of the pre-season study, showing that day to day recovery, assessed with HRV was faster and more complete for lighter players with lower body mass. However, the size of the changes were smaller in this study compared to pre-season. The authors suggested that the high training loads and temperatures of the pre-season camp could have conditioned the players to be more resilient during the season itself, via higher aerobic fitness and increased blood plasma volume. The higher sensitivity of HRV compared to resting HR is not surprising, considering that resting HR depends on both parasympathetic and sympathetic influences whereas HRV is a purer measure of the parasympathetic influence on the heart.

In terms of practical advice, the authors conclude that larger players are likely to require greater recovery durations from training and that coaches should both consider specific post-training recovery techniques for these larger players, and look out for signs of fatigue and mal-adaptation amongst them.