HRV response and other lessons from a long Gran Fondo

As some readers will remember, two years ago I prepared for the Mallorca 312, the longest (and possibly best organised) Gran Fondo cyclosportive event in Europe. Last weekend was the third time I have done it, and my target was to beat the previous two years’ times. My training volumes & intensities were very similar to previous years, and I was using the same bike, although I had a new Dura-Ace power meter fitted to my bike. I used Best Bike Split to give me target power levels, useful especially for the longer climbs.

What I really wanted to focus on was nutrition & hydration, which had been sadly neglected the previous year, and which led to me crawling past the finish line in a very uncomfortable state, feeling nauseous for hours afterwards. So what did I do differently? This time I recognised that however much it seemed like a good plan, it was unlikely I would be able to force down solid food after about 6 hrs. I remembered from the previous years that SiS gels still tasted acceptably ok after that point, and that plain water (not the event supplied sports drink) would probably go down in small sips at a time. Taking a tip from an Ironman triathlete buddy, I emptied the contents of 10 SiS gels into a Torq recovery bottle, which has a one way valve suitable for thick liquids to pass through. SiS gels are also isotonic, so you don’t have to wash them down with water if you don’t want to. I also ordered a new 950 mL water bottle, both for the capacity and also because it would be uncontaminated by the taste of previous sports drinks. For the first 6 hrs, I would aim to eat 60-70g / hr of carbs from flapjack bars, dried fruit, and jelly beans. Yum!

So how did it go? As for previous years, we arrived on the start line nice & early so we could join the motor paced fast group & get a free ride to the base of the Col de Femenia. That worked out fine again and I settled into my target power range of 195 – 210W, which really didn’t feel like much effort at that point. The weather, roads & scenery were superb, and the first 5 hrs passed quickly, with all eating & drinking going to plan. After the mountains, I was lucky enough to join a group of Mallorcan riders who rode smoothly at a perfect pace. Great I thought – just have to hang with these guys for a new personal record time! Unfortunately, this plan came to an abrupt end when, on passing through a village which had a feed station, our new friends all dismounted & went into a restaurant for lunch.

It was now time to switch to the gel + water strategy, but that coincided with joining a group that was not as well organised, and put in 300W surges over every little rise. The bad thing about that is that intense anaerobic activity relies heavily on carbs, at the time when I was having a reduced intake forced upon me by the guts starting to switch off. The outcome was inevitable – at 9 hrs I blew up and commenced the long, lonely, 2.5 hr slog for home. In the end, my time wasn’t too bad, and was within 1 minute of the Best Bike Split prediction at 11:42. Not good enough to beat the previous year’s 11:27 though. I don’t know what the answer is to maintaining energy after 8 hrs of riding – one person suggested electrolyte tablets as a way to avoid nausea. I do think I should have avoided the big carb consuming surges, but it’s very tempting to stay with a group both for company as well as energy savings from drafting. The power profile from TrainingPeaks is shown below. You can see that intensity discipline was well maintained until about 6.5 hrs, when the spikes started to creep in:

The route I took is also available as a one minute video simulation by Relive – a great fun app that connects to Strava in case you haven’t come across it.

On now to the recovery. This year, I did not collapse at the finish line, and I actually felt like eating dinner, so that was definitely an improvement. The image from ithlete Pro shows how my HRV changed over the next few days after the event. 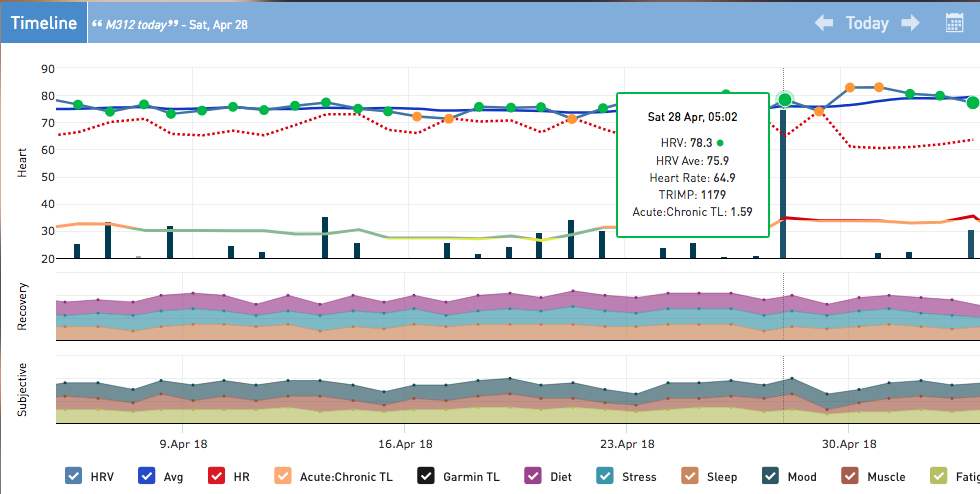 On the Sunday, I had a low HRV / high HR amber, which was expected, and very sore legs! Monday & Tuesday are interesting, because they are unusually high HRV scores, well above my baseline (blue line) and carry an amber warning. These coincided with a lower than normal resting heart rate, and a lot of physical & mental tiredness. By Weds & Thurs (4-5 days post event), things are getting back to normal, in the green, but with a raised HRV baseline. A raised HRV baseline often corresponds with improved aerobic fitness, and this weekend, a week after the event, I have had some all time power records in TrainingPeaks: 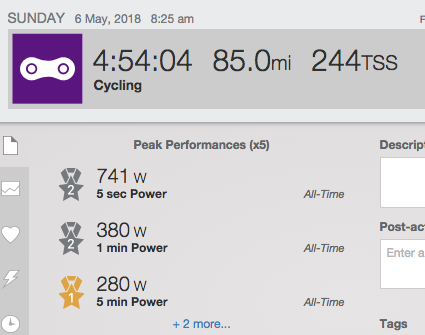 A final point I want to make about the HRV chart is that a criticism sometimes levelled at HRV is that daily readings carry high variation and therefore can’t be trusted. In my experience, this is almost always down to the measurement conditions & protocol. You do need to be disciplined with taking the reading at the same time every day, breathing in a controlled manner (in through the nose – out through the mouth) and using a validated sensor (I use the ithlete finger sensor). We did an article for TrainingPeaks recently which highlighted common misconceptions & best practice for taking HRV measures to ensure they are as reliable and insightful as they can be.

From endurance, I now need to get my body ready for out & out racing at the Tour of Cambridgeshire in 3 weeks time!