What position to take your HRV – lying down or standing?

It’s a question we get asked a lot at ithlete: should I take my morning measurement lying down in bed, or standing up? Our response has always been that if you have a low resting heart rate (less than 55 bpm), then you should be doing the reading standing up. This is to avoid an effect called parasympathetic saturation, which occurs when you get very fit: your heart and blood vessels become very efficient, so the brakes to your heart rate are fully on when you are lying down at rest. In theory, this makes daily HRV readings less sensitive to changes in training loads and lifestyle stress.

Although this has been known for a few years, recently, researchers in the Czech Republic decided to put it to the test in a detailed study on an elite fin swimmer during their 6 month training period before the World Championships.

The researchers monitored an elite female fin swimmer during 3 phases of training over the 6 months, and the period including travel to a distant location (Colombia) where she performed her final preparations for the games. HRV readings were taken in the lying down (supine) and standing positions, using medical grade ECG equipment every training day in the morning after waking. Neither the athlete, nor the coach knew the results and continued to adjust her training using traditional training load & subjective (fatigue) measures.

They found no significant changes in HRV or resting heart rate during the Period 1 & 2 build phases, nor during the pre-competition taper Period 3, where volume was reduced to 50% of the previous period, but intensity maintained. The interesting findings were during the monitoring at the competition location, which involved lengthy travel, 6 time zones away from the athlete’s home. This chart shows that the supine HRV and HR remained essentially unchanged throughout: 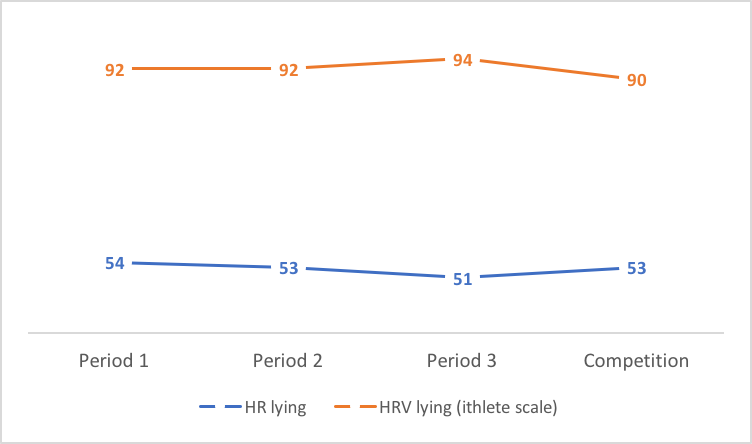 Regarding the lack of change during the training build phases, the authors concluded that ‘the athlete is so well-trained (adapted) that the changes in the amount of load do not induce a significant stress response leading to changes in autonomic cardiac regulation in the supine position’ but that ‘It is apparent that the accumulation of stress factors in the form of training, competition stress, and flying over time zones induces a significant response of the regulatory system, but detectable only in the standing position.’  They also made the interesting observation that the lowered HRV and raised resting HR immediately prior to competition did not hurt the athletes performance – in fact she delivered a personal best at the games. This is quite commonly observed by ithlete users as a race day amber or red – if your HRV has been good during taper and you have not become sick, then this is not going to hurt your performance, and in fact could be a helpful stress response preparing you for the ‘fight or flight’ that awaits.

In another recent study on recreational runners, researchers at KIHU in Finland found that nocturnal HRV was more sensitive to the previous day’s training than measures the next morning, either supine or standing. This could be explained because the nighttime measures were taken during the first 4 hrs of (deep) sleep, when the body is in repair mode; testosterone and human growth hormone are most active, and it does not necessarily reflect the state of recovery the body has reached the next morning.

In summary, HRV readings taken standing up do appear to be more sensitive to accumulated stress, especially in well trained athletes, and this confirms our recommendation for anyone with a resting HR lower than 55 bpm. It’s likely that seated position represents a good halfway house for those with resting heart rates between 50 and 65 bpm, but further research is needed to confirm this.

Autonomic cardiac activity and psychometric data analysis during different training preparation periods before the World Championship in an elite fin-swimmer: a case study