For the third year running, we participated in the Science & Cycling conference, held at the location of, and just before, the start of the Tour de France. This year, ithlete’s Simon presented a paper on how to use HRV in training with both recreational and elite athletes.

A couple of ithlete Coaches, Kevin Poulton and Chris Kilmurray kindly supplied data from their athletes which illustrated some very useful feedback on how they were adapting to training and other stresses. This generated quite a bit of interest, so we thought we would share it a bit more widely in this post.

Caleb’s resting HR increased significantly on ascent to an altitude training camp, during which time his training was adjusted, and settled after 3 days indicating the initial phase of acclimatisation.

This immediately preceded the Tour of California, where he performed very well, coming second in the points competition (with 4 podium appearances). 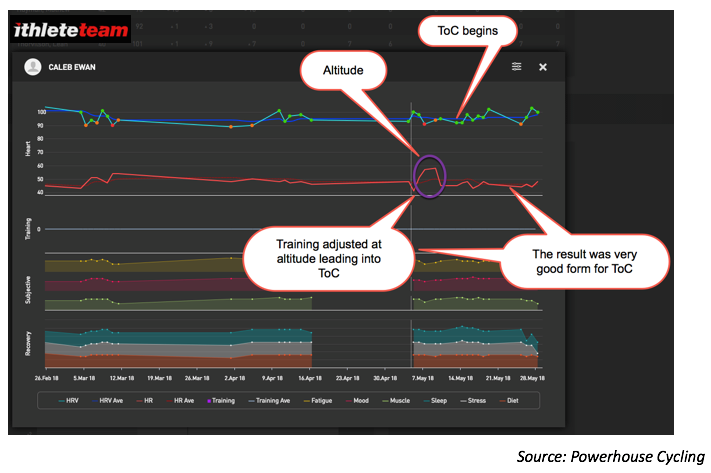 Mat Hayman is now 40, and has used ithlete HRV for several years, including the now famous Zwift preparation for his 2016 Paris Roubaix win.
Mat has a young family which means his total load includes more varied sleep patterns and frequent challenges to his immune system than might be the case for a typical pro. ithlete HRV was used to avoid and manage potentially debilitating periods of sickness in the run up to this year’s Paris Roubaix, where he came 22nd. Again, you can see the effects of acclimatisation at altitude preceding the Tour of California. 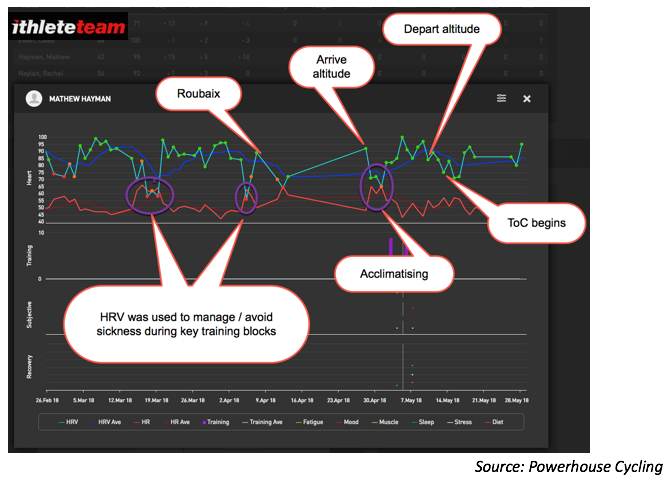 Following a de-loading (taper) phase, where acute training load is reduced, Coach Chris Kilmurray uses the average heartrate during a 10 min fixed 2.5km distance indoor rower session to determine how effective aerobic development has been. The lower the heartrate the better, and he finds the 7day HRV average (blue) line on ithlete is the best prediction of improving fitness, as the blue line on the dark background chart shows. The rolling 7day average HRV is more immune to day to day variations. This is also the parameter that Alejandro Javaloyes used for his study on HRV guided training also presented at the conference.